I picked up Star Trek Into Darkness when it came out, and I finally had a chance to watch it. It took a lot for me to avoid any spoilers from the point if was released into theaters. This was probably one of the most successful times I've had of avoiding any spoilers about a movie. I have to say, it was pretty hard to try not to look anything up about the flick during this time, and I even avoided looking at the back of the Blu-Ray. Yeah, that's some devotion. So my first viewing of Star Trek Into Darkness really was a completely untainted, and spoil free experience.

Now that I'm done beating the dead horse about how I was able to avoid spoilers here's a brief description of the movie from IMDB.com: When the crew of the Enterprise is called back home, they find an unstoppable force of terror from within their own organization has detonated the fleet and everything it stands for, leaving our world in a state of crisis. With a personal score to settle, Captain Kirk leads a manhunt to a war-zone world to capture a one man weapon of mass destruction. As our heroes are propelled into an epic chess game of life and death, love will be challenged, friendships will be torn apart, and sacrifices must be made for the only family Kirk has left: his crew.

Star Trek Into Darkness was an action packed ride of Sci-Fi and Awesome! I really enjoyed it, if you couldn't tell. J. J. Abrams' alternate time universe really has come to be something that makes me want more. He really does keep the Star Trek fans happy, while appealing to audiences Star Trek has never had before.

At this point in the game, I'm not going to worry too much about having spoilers in my review. Anyone who's familiar with Star Trek the Original Series, and Star Trek II: The Wrath of Kahn could see the references to these throughout the film. The best one in my opinion was the scene where Jim Kirk died, which references the iconic scene in the original movie where Spock was the one who originally died in the main timeline. In my opinion both scenes where the hardest scenes to watch in Star Trek history. Another little reference that I got a kick out of was having the Tribble in the lab that Dr. Mcoy was experimenting Kahn's blood with. This of course references the Trouble with Tribbles episode in the original series.

Another cool little added bonus was when we got to see the Klingons. I really liked the helmets that they wore, but the actual klingons ended up reminding me of the alien from Enemy Mine, Jeriba "Jerry" Shigan, played by Louis Gossett Jr.

Overall, I give Star Trek Into Darkness a 5 out of 5. I really enjoyed it, and I was giddy the entire time I watched it with all the references. The story itself kept you sucked into the movie. It's definitely work checking out, especially if you're a Star Trek fan.
Posted by Apollodorus Films at 5:22 PM No comments: 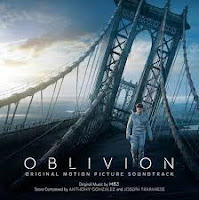 I had a chance to finally see Oblivion. Actually it was John's post that gave me the push to see it now that it's on Blu-Ray. It was quite a convincing post, considering how he looks at it.

Here is a brief synopsis of Oblivion from IMDB.com: One of the few remaining drone repairmen assigned to Earth, its surface devastated after decades of war with the alien Scavs, discovers a crashed spacecraft with contents that bring into question everything he believed about the war, and may even put the fate of mankind in his hands.

Oblivion is a Sci-fi/Action flick which takes you for a mental ride. The movie pulls you along, and hits you with something new as you get deeper into the rabbit hole. Honestly I believe the reason why I enjoyed Oblivion as much as I did was because it made you think. I would describe it as this years version of 2001 A Space Odyssey. At leas at the moment that's the closest film I could compare it to, but that still isn't a good comparison.

Overall I give Oblivion a 4 out of 5. I enjoyed the ride every moment of the movie, but I still felt like some things were spoon fed to me that didn't really need to be. It's a good flick and worth at least one view.

Posted by Apollodorus Films at 12:57 PM No comments: