Iron Man Three, the third installment of the Iron Man movies. This one wasn't directed by John Favreau like the first two. Which is something that had me worried when it was first announced that another director would be directing it. Iron Man Three was directed by Shane Black, know for directing Kiss Kiss Bang Bang, and wrote the screen play for Lethal Weapon. After seeing that these two movies were under his belt, I felt better about the hands Iron Man Three was in.

Iron Man Three takes place just after The Avengers film. Tony Stark now has PTSD (Post Traumatic Stress Disorder) from everything that happened during The Avengers. He can't sleep, and if he does he has nightmares that wake him. On top of that Tony has to face an enemy he created in his past who has the ability to be able to defeat Iron Man.

Even though I did feel better about Shane Black taking the wheel on Iron Man, I was still nervous about it. Iron Man is my favorite Marvel hero, I didn't want to see the franchise die with him. Well I ended up really enjoying the third film. Granted it wasn't the best one, but it was a great film non the less. I liked how they took one of the stories from the comics, and brought it to the big screen. They did put their own spin on it, but it still worked. After watching the end of Iron Man Three, it made me want more. I certainly hope they do end up making more Iron Man movies after the new Avengers comes out.

Overall I have to give Iron Man Three a 3.75 out of 5. I really enjoyed the story of the film. The acting was great, I felt worried when I was supposed to, but also laughed when I was supposed to. If you haven't seen Iron Man three, or any of the Iron Man movies, go check them out, but make sure you start at the beginning, and watch The Avengers before seeing this one.
Posted by Unknown at 2:50 PM No comments:

The Real Duck Dynasty: The Might Ducks, the review

Who over the age of 25 wasn't ever looked up and saw ducks flying and screamed "THE FLYING V"! Or used the horribly racist term "The Oreo Line" I know I sure refer to rich white kids as "Cake Eaters" but I'm sure poor kids eat cake as well! if any of these lines ring a bell then your well aware of the Trilogy know as The Mighty Ducks and you had a pretty damn good childhood!
I have a special love for these films, and seeing the creator Steven brill is from my home town of Utica NY, it has a spot in my heart. The first film came out and my grandmother took me to see it and the next day my mom took me to get roller blades, a stick, and all the pads! I was hooked and hockey was now the center of my world. My friends and I even started a street team called the Wall Street lightning, sadly we were the only ones who had the idea and had no other teams to play, but we practice every day and rocked it!

The story is a common one, an underdog story of misfits who suck, then get better and pull off a miracle. A format that has been done over and over, but not to many spawn a real professional sports team, don't see a baseball team called "The Bad News Bears" do you? I didn't think so!

Let's take a look at the films shall we! Gordon Bombay, a cocky, selfish, alchocalic lawyer, and former pee-wee hockey star haunted by the death of his father and a missed goal he had 30 years ago. Gordon gets  arrested for a DWI, Gordon forced by his boss to take a break from work and plead guilty and do community service coaching a pee-wee hockey team named District 5, "D-5". A group of rag tag misfits of all colors and backgrounds. 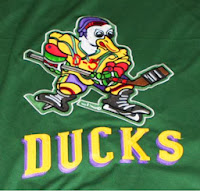 The leader of the misfits Charlie Conway, a fatherless spaz who needs a father figure, and tips on how not to suck in hockey. Gordon starts off by hating it because he hates hockey after his father died, which why does he hate hockey it's not like hockey killed his dad or his dad was in a hockey accident, but I digress. After a game or two Gordon try's to get the kids to cheat, to take dives, after this back fires Gordon is told he needs to remember how to fly by Hans his hockey father figure and owner of a hockey equipment shop . Gordon finds his way, and teaches the kids not only to play hockey but how to live outside the blue lines. The D-5 Team finds a sponsor in Gordon's boss Mr. Ducksworth making the teams new name "The Ducks! Now they have a new name, gear, and a homeless street thug who can't skate but has 1000 MPH slap shot.

In the cut throat world of peewee hockey, enters the movies heel, Coach Jack Reilly now as far as Disney kids sports movie he is a pretty bad dude, let's do a check list, he cheats, tells a player to take out and injury another child, he lies, picks on poor kids, blackmails kids, and torments a guy about a missed goal he had at age 10 after his dad died, yeah a heel if I ever saw one!

After some trick plays and playing hockey their way the ducks find them self in the finally game agains Gordon's old team The Hawks, and his skelitor coach Reilly. After no time is left Charley is Hooked and the ducks are given a penalty shot with the game tied it could win the game. Gordon let's charley take the shot and tells him do the triple deek cause it worked so well for him 30 years ago.

Charley hits the ice takes his shot and wins the game. Now this story has been told over and over many times but it's the characters the feeling, it's the jokes and one liners that make this film so much more. It's been almost 22 years sense this movie has been around and it still holds water it still is a good movie, and I feel that it will stay that way years to come. If you have never seen The Mighty Ducks then you are truly missing out, do your self and kids a favor and watch it together!

It's my first post of 2014, and I couldn't think of any better movie to do a post on other than The Wolverine. It's also the newest movie I've seen recently. I'll do my best to give any warning of spoilers for those who haven't seen the movie yet.

The Wolverine movie is based on a limited series named Wolverine by Chris Claremont, and Frank Miller. It follows Wolverine when he travels to Japan to see a dieing friend he saved during World War II, Yashida. It starts with Yashida sending Yukio, a trusted warrior, and friend of Yashida's daughter, Mariko, to tell Logan that Yashida's going to die soon, and he'd like to pay him back for saving his life all those years ago. On Yashida's deathbed he tells Logan/Wolverine that Mariko's life is in danger, and from there starts the adventure.

The story they followed was a great choice. It gave us that battle he goes through inside his mind, the battle between man and beast. It also pushes the idea of Logan being a Ronin, which enforces the idea of him being alone in this battle both in his mind, and in the main story. It's actually caused me to want to pickup the comic to read the original story. 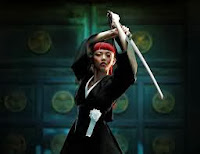 The effects, and camera angles used in the film helped to enforce the storytelling. (Spoiler) In the scenes where Logan was shot after he started to loose his healing abilities, the camera takes this tunnel vision effect which gives the viewer the same feeling that Logan is going through, and going back to the story, it give the feeling of that battle between man and beast. They also didn't stick on these effect for too long, and even avoided using it too much, making it old to the viewer. The best editors in the film industry have said that your edits shouldn't be noticeable, otherwise you loose the viewer, and you take them out of this world you've created. Basically they were used enough to help enhance the story, and not take you out of it. The other thing about the effects used in the film was the use of them for the Silver Samurai. You could tell that they used both digital, and practical effects to keep it from looking fake.

Overall I really enjoyed The Wolverine. It's definitely one of my top 10 films I've seen this year. I have to give it a 5 out of 5. As an added note, if you pick up the Blu-Ray, check out the special features, they're pretty cool.
Posted by Unknown at 5:32 PM No comments: