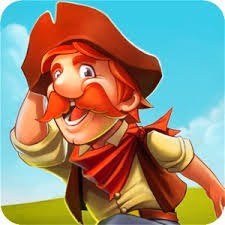 If you've been listening to my new audio show on YouTube, The Stro Show, you probably know that I've been playing a new game on my Kindle The Oregon Trail: American Settler. A game not to be confused with Farmville. If you listen to episode three of The Stro Show, you'll get why that's funny. It's made by Gameloft, and is available for Kindle, and in the Apps Store.

The Oregon Trail: American Settler isn't a typical Oregon Trail game. It actually takes place after you make it to Oregon. Basically you build a settlement where you need to produce food, wood, and money to build, provide to shops, and to grow your settlement. In all honesty it's a much easier game to play than the original Oregon Trail.

Overall The Oregon Trail: American Settler is more of a time killer type of game. It's fun in the way any basic Facebook type game would be, you play it because you don't have any important to do at the time. It's hard to give a game like this a real rating because it doesn't fall into the traditional gaming category, so I'm going to rate it as if I'm only looking at it compared to other games in the same time killing category. I'm going to give it a 3.5 out of 5. It's fun for a time killing game, but I do forget that I have it at times.

Posted by Apollodorus Films at 2:30 PM