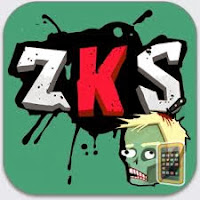 Zombie Killer Squad is a newly release IOS game. It's a free game found in the App store. I found out about it because of SeaNanners, and Syndicate, a couple of entertaining commentators, that post game play on YouTube.

The game play for Zombie Killer Squad is pretty simple, you have to go through different obstacles which are zombies, go around metal shipping containers, go up ramps, or under other structures in the road. The point of the game is to collect as many of these coins as possible while trying to survive as long as possible. The concept makes it sound easy, but it's a tougher game than you'd expect. You have to swipe left or right to dodge any obstacles, you can also jump over zombies instead of shooting them by swiping up, and if you need to, you can swipe down to go under certain structures.

Before I go on talking about certain perks you can get, you can play as three different characters. You start off with Luke unlocked, with Luke you get a mount you can use. His mount is a mule, or donkey. It's actually quite entertaining shooting zombies while riding a donkey. There are two more characters you can play as that are locked, you can either collect 100,000 coins to unlock each of them, or pay $.99 to unlock them ahead of time. They are SeaNanners, and Syndicate from YouTube. If you play as SeaNanners, you can ride a cat as your mount, and Syndicate rides a motorcycle. I downloaded this game just for the chance to play as these two characters. One point I'd like to say about needing to unlock these other two characters is that they don't force you to pay extra to play as them. The game actually allows you to work towards unlocking them instead. It drives me crazy when you download a free game and then to get anything worth while to use in the game, you have to end up paying extra, and a lot of times it's more than just $.99 to get them.

While you're going through the game you get to run into different perks. The first one I noticed was the magnetic perk, if you pick this up, for a limited of time all the coins and some additional items get picked up by your character. The next perk I found was the Bull Mount. The Bull lets you ride through anything. Basically if you happen to pick it up, you ride a bull for a limited time, and nothing can stop you, you just take all obstacles out that are in your way. The last perk is the flight perk. It has you ride a bird over everything and you can still pick up coins that are in the air for a limited time, just like everything else. You can spend coins to extend the duration of these different perks/mounts, and to buy more ammo, ect...

Overall I really enjoy playing this game, whenever I have a little bit of free time, I pull my iPhone out and play a round or two, at least. I have to give Zombie Killer Squad a 5 out of 5. It has everything I would expect from an IOS game, and more. Remember it's FREE, and you can find it in the apps store.