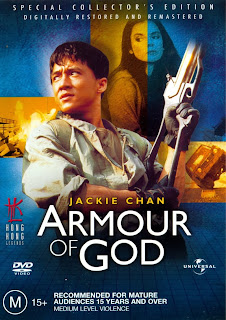 Armour of God is about Asian Hawk aka Jackie an ex-singer turned fortune hunter. In a plot to get Jackie to find the rest of the actual Armour of God, a cult kidnaps his old flame, and the fiance of his former band-mate, and uses her as ransom. Well Jackie, his old friend, and a rich guy's daughter go to help save the girl, and Jackie Chan shenanigans ensue.

As with pretty much all Jackie Chan movies, there are a bunch of crazy martial arts, and car/motorcycle stunts, with many of them consisting of a comical twist. Actually that's one thing that I do like about Jackie Chan movies, is that they are very light hearted. You can just sit and enjoy them. Armour of God was all of that, as you would expect. It was a fun filled ride all the way through. Once in a while Jackie's buddy would start to get annoying from him going back and forth from acting like a tough guy, to being humbled, and not having the ability to learn from any of his lessons in the flick. The one thing that actually made me pause was how it ended, it felt like it happened too quickly, but the crazy jump to the hot air balloon was pretty cool. Overall I give Armour of God a solid 3.5 out of 5. I enjoyed it all the way through, and it was a true Jackie Chan flick from beginning to end. I definitely suggest anyone to watch it at least once.

Posted by Apollodorus Films at 6:34 PM