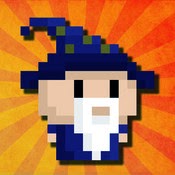 Tiny Dice Dungeon is a fun little RPG that I discovered at PAX East this year. I had a chance to speak with its developer James Barnard of Springloaded Software about the game. He actually did a video interview with me about the game which you should be able to watch below, and at YouTube.com/theretroave.

Tiny Dice Dungeon is a free IOS, and Android game, that doesn't force you to purchase anything to be able to enjoy the game. It's an RPG that puts the random generators in front of the user as dice. You can keep rolling until you feel you built up enough attack power to hit the monster with, or until you roll a "1", where you then loose your turn. There are different kinds of dice you can use, you start with the generic normal attack dice, from there you can eventually make poison, fire, plant, and other forms of dice which effect different types of monsters in their own way. On top of just having your character, you eventually end up gaining other characters to play as in the game, and you can even catch monsters to help you through the different dungeons.

The game is fun and addicting. I honestly end up playing the game on my iPhone every time I have a moment free. Don't forget to check out the video interview I did with the developer James Barnard below. He gives some great information about the game, and some great back story as to how he came up with the idea for the game.


Get more info at www.TinyDiceDungeon.com