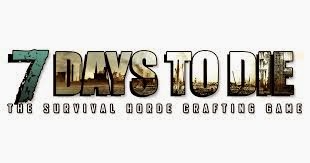 I had a chance to play 7 Days to Die, the alpha version, a game who's subtitle really describes it all, A Survival Horde Crafting Game. I was first introduced to the game by a couple YouTube commentators. I didn't actually decide to try it out until recently when a couple co-workers at my day job started talking about playing it.

7 Days to Die takes place in a post apocalyptic world where zombies are everywhere, and you have to do your best to survive. My first experiences with the game involved the game lagging on me a lot. The game is in alpha stages so I wasn't too surprised about this, but when I went further into researching into this, it turns out that it is a more common problem on mac, and not so much on windows, so I rebooted my mac to a windows 7 side I have installed on a partition, and started again. Doing this changed my experience with the game completely, instead of feeling helpless, and hoping that when I shoot at a zombie I don't lag or drop 30 frames at a time, I'm now able to move smoothly through the map, and actually have a chance fighting off zombies.

In the game you start off trying to find and save items to help you survive. This includes food, water, weapons, tools, and building supplies. While doing this you need to fight off zombies and try to find safe places to stay at night because this is when the zombies become faster and more powerful. During the beginning stages you tend to just start off by trying to learn how to craft simple items and try to find an attic in a random home every night to stay in. You'll also learn very quickly to try not to make too much noise at night because that will just bring more of the undead to your doorstep. Playing the game with others helps with the fun factor a lot, and it helps when you have a horde of zombies coming at you. Eventually you'll realize that resources are limited, (at least in the alpha) and you'll need to learn to craft all the items you need, and to live off the land. 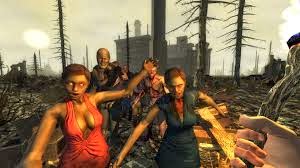 Overall I really enjoy playing 7 Days to Die, for a game that is only in the alpha stages, it already has great functionality, (a least on the windows side). You can see great things coming for this game. I have to give 7 Days to Die an easy 4.5 out of 5. It lost a half a point for the issues I had running it on a mac, but I still had fun in the end. If you like crafting survival games with lots of zombies, I suggest you give 7 Days to Die a try. Here's the game trailer from Steam below.


Posted by Apollodorus Films at 9:32 PM