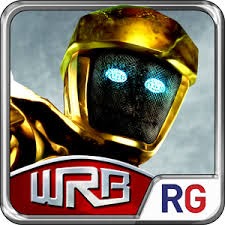 Robots and boxing, when put together are two things that any child, and or man-child should find to be awesome. I found the Real Steal World Robot Boxing game on the Amazon Kindle App Store, and I couldn't help but download it and start playing. The game starts off as quite addicting, and you can't help but want to work your way up the ranks, just like Atom in Real Steel the movie, and become the WRB Champion.

The game play is pretty simple you have the four directional buttons to move your robot, and then there are two different punch buttons, one for a basic punch/jabs, and the other for stronger punches that do more damage. Then there is the block button, which is self explanatory. As you go along boxing different robots you get money for every fight and you can use that to upgrade your boxing bot, and you can buy other robots too.While playing the game you'll realize that you have a limited amount of power for fights. You start off with five power cores, which translates to one fight per power core. There are in app options you can purchase to give you more power cores, gold coins, upgrades for your robots, and to purchase robots, but you don't need to spend money to actually play the game to the end.

Real Steel World Robot Boxing also has multiplayer options for your friends who have the game. There are two options for multiplayer, there's online, and local. My understanding is that the online multiplayer allows you to box against other random players on the internet, and local will allow you to box anyone on WiFi, or Bluetooth. I tried to play the online mode but you get a coming soon message when you tap it, which has been there since I first started playing around Christmas 2013. I unfortunately don't have anyone to play via the local option so I was unable to test out any of the multiplayer options.

The biggest issue I have with the game is that I can't have a robot fight beyond it's league. If you're robot boxer is in a lower league, you can't have it fight in higher leagues, and vice versa. When I first started the game I wanted to take my robot boxer, and work my way up to the championship, and I was quite disappointed when I realized that I couldn't. Overall I have to give Real Steel World Robot Boxing a 3.5 out of 5. It's a fun game to play, and I do suggest giving it a try considering it's free.

Posted by Apollodorus Films at 9:31 PM