Lost Memories of a Film Generation

If you were born before the 1990's, or before the imagination was stripped out of Hollywood.Then consider your self lucky, lucky enough to have been born in what is, and will be the best time for you to be filled with memories. Movies that have won a place not only in your hearts, but are forever a part of you, and your life, you quote them, you pass them on to the young children in your life. movies that for all sense and purpose will never die. These are the thing we are blessed with for the rest of our lives. (as long as George Lucas doesn't touch them).

With the limitless number of films that came out in 1978 to 1989, these "movies", when they came out did one thing. They allowed children to be and do one thing, to be children. Movies didn't predict  what kids were going to be like, or how they might act one day, but instead what kids were doing and who they were at that time. Unlike films now a days that places things in films for them to  jump on board with. Kids in the 80s and even the early 90s saw their selves on screen and could relate to them, they could have more of a connection. Kids now just skip over being a kid, because their films aren't the same, films are either to adult or to soft, not showing that young generation on screen as they see themselves. This makes it harder for kids to have a connection to what they see, and it robs them from having lasting memories and making films of that generation timeless.

This is why parents still show their kids films like, Willy Wonka, The Gonnies, Monster Squad, Who Framed Rodger Rabbit, and The Gremlins. See I just named 5 right off the bat and for the life of me I can not name one from this generation that will have any type of staying power or timeless feel as like we had. No films that came out had any type of a impact on the youth of this generation to create memories. 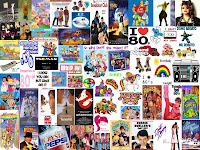 I have to say, this is sad, but they will always be able to watch our movies. Make new memories from the very things that gave us a perfect childhood, and kept our imaginations running wild. They can go on a treasure hunt for One Eyed Willy's gold, or save Toon Town, to stop little green men from taking over their small town. Win a golden ticket, or get lost in the land of OZ that isn't CGI. Films are an outlet and a place to leave their crappy homework filled life for a few hours, but when their world on screen has less imagination in it, the lasting effect is that in their real lives, they just don't care. Lets help the kids of a lost generation find memories share these films, pass them on save the kids.... share your favorite kids movie with us a long with your memories on our twitter page. @JohnDavern, @AlexStronach