Just a little heads up about this blog. This is a place where we'll talk about pretty much anything, but mostly movies, games, and entertainment in general. The origins of the name Retro Avenue come from an Internet Radio show I did with one of my buddies. In honor of those times, I decided to name this blog after the radio show. It was actually the most popular show on the station, but due to unforeseen circumstances the station was closed down.

Now that we have the intro out of the way, lets talk about Batman. I was able to check out Batman Year One (the movie) a few days ago, and I'd like to post some of my thoughts about it. And if you haven't seen the movie, anything that might be a spoiler I'll mark with (spoiler). It's been a while since I've done one of these, so I apologize if this comes off pretty amateur (I probably shouldn't say that).

Synopsis: Two men come to Gotham City: Bruce Wayne after years abroad feeding his lifelong obsession for justice and Jim Gordon after being too honest a cop with the wrong people elsewhere. After learning painful lessons about the city's corruption on its streets and police department respectively, this pair learn how to fight back their own way. With that, Gotham's evildoers from top to bottom are terrorized by the mysterious Batman and the equally heroic Gordon is assigned to catch him by comrades who both hate and fear him themselves. In the ensuing manhunt, both find much in common as the seeds of an unexpected friendship are laid with additional friends and rivals helping to start the legend. (Synopsis is written by: Kenneth Chisholm on IMDB.com, http://www.imdb.com/title/tt1672723/plotsummary?ref_=tt_stry_pl) 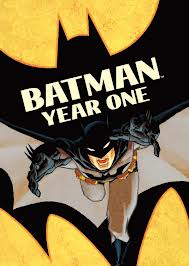 These are the thoughts and views of someone who hasn't read the Frank Miller comic it's based from (something else I shouldn't admit). To start off, I gotta say I really enjoyed the flick. I really enjoyed the story, it felt more like a realistic beginning for Batman, and even one for Lieutenant Jim Gordon. Don't get me wrong I love the Christopher Nolan flicks, their classics in their own right. I only had one issue with what comes off at a minor plot point with Gordon, but I understood it to be something used to show that nobody in this world is perfect. (Spoiler) That plot point was when Jim Gordon ends up getting into a little side relationship. My only issue with that plot point is that it messed with your perspective of Gordon, but what else would you expect from movie based off of a Frank Miller graphic novel.

When I first started watching the flick, the first thing I noticed was the animation style, the best way I can describe it is that it's a love child between old Japanese animation, and American animation. At first it threw me off a little (probably because I watch too much of the original animated series, if that's possible), but I quickly got into it.

The voice acting was great. I've always been a fan of Kevin Conroy being the voice of Batman/Bruce Wayne, so I'm always worried whenever someone different plays him. (I also think the same thing when anyone other than Mark Hamill does the Joker) The voice actors were really able to make the characters come to life, even with the high expectations based around the old voice actors.

Overall Batman Year One is a truly enjoyable flick, and I suggest anyone who is a Batman fan, and hasn't seen it yet, to check it out.
Posted by Apollodorus Films at 3:32 PM