Which is better? Watching a movie on the silver screen? Or watching it at home on your home theater system? This has been an argument that has popped up in recent years, with the development of better home theater systems. The argument tends to be based around what might be tradition, comfort, and all around preference. For the sake of argument I'm going to throw in a third option, the drive in movie theater. Yes, it's similar to a regular movie theater, but you do still have a different kind of experience.

The Home Theater allows you to watch your movies in the comfort of your own home. That's pretty much the reason a lot of people prefer to watch a movie at home, it's the comfort level. You're more comfortable sitting on your couch, or recliner, than sitting in a movie theater seat. There is also a convenience to watching a movie on your home theater. This setup gives you the power as to how, and when you want to watch the movie. You can pause the movie so you don't miss anything, if you need to run to the restroom, or to get a snack. You have the option to watch the flick by yourself uninterrupted, or with some friends, and talk as loud as you want. As I said you're in the comfort of your own home, and have complete power over the situation, you're like a little god of the movie world.

Next up is the Movie Theater. Many movie goers prefer this above all others because of the experience, and the tradition of seeing a movie on the silver screen. Seeing a movie in the theaters tends to be a social event. Most people are going to go with at least one person, and you're usually going to be sitting in a crowd. The idea of watching a movie is that you get a complete experience. You sit there with a group of other people many or all you probably don't even know, and you immerse yourself right in the film. A good portion of the filmmakers film their movies with the idea of people viewing it in a movie theater. They think about the experience the viewer has, along with the story, special fx, ect... On top of all that, there is a tradition to viewing movies in a movie theater. That's part of the reason why theaters still exist to this day, even most production, and distribution companies think, release the film on the big screen, and then we put it on BluRay, DVD, Netflix, and whatever else that is out there later on. Movie theaters also usually have a bigger screen, and a better sound system than one you might have at home. These are the key parts the help totally immerse you into the film. I could write an entire post on the experience of watching a film in a movie theater, but I believe you get the point. 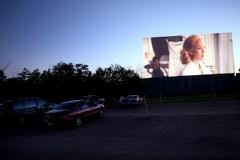 Last but not least is the Drive-In Movie Theater. When you go to a drive in movie, you're going for the experience. The drive-in movie is almost like a mixture between watching a movie at home and going to the traditional movie theater. I say that only because you have the option to sit in the comfort of your own car (if your car is comfortable), but you still have strangers around you watching the same movie. They're fun and more relaxed of a setting. I like to think that's why some people even prefer the drive-in over anything else, and at a lot of them you get to see two movies for the price of one. Drive-In movies are a dieing breed. If you have yet to experience one, I suggest that you go check one out before there aren't any left.

Over all whether if you prefer staying in, going out, or driving in, each option has it's pluses. Honestly I could write up a post for each of these giving all of the possible positives and negatives for each experience, but in the end it's all really just a matter of opinion.
Posted by Apollodorus Films at 1:49 PM