Saturday Morning RPG is an episodic role playing game set in a world inspired by 80's cartoons and pop-culture. I was able to speak with Josh Fairhurst the Lead in Design and Programming. Here is the video below. 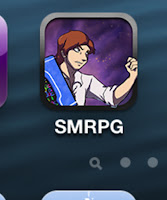 After talking with Josh about the game there was only one thing that I needed to do... it was to actually play the game. The great thing about their approach to the game is that they let you play the first episode for free. I went to the app store and downloaded it to my iPhone, I couldn't wait to start playing it.

Okay so now I downloaded Saturday Morning RPG to my iPhone, I needed to take a minute and just look at the icon on the screen. This was the moment of truth, is the game as good as they say it is? Are there as many cartoon and pop-culture references from arguably the best decade in history, as they say there are?

Needless to say the instant I started the game I couldn't put it down. I actually got in trouble with my wife to be, because I couldn't put the game down. Don't get me wrong she does support my gaming habits. I found myself not only searching for every reference I could find about the 80's, but also taking the extra time hitting up the side quests. Honestly it was a great marketing idea for them to have the first episode for free, the game pretty much sells itself.

In Saturday Morning RPG you play a character named Marty, who is trying to save the girl of his dreams from Commander Hood. You loose your first battle with Commander Hood so The Wizard comes around and gives you a magic trapper keeper, which makes you powerful enough to fight Commander Hood and his goons. The Wizard character makes funny references from the movie The Wizard, which was one of the best things to see when you first start the game. I would talk more about the game but I don't want to give out too many spoilers.