A Generation In A Half Shell :have faith:

Now either you lead, do machines, your rude or a party dude, ninja turtles for kids left us being able to relate to if not all then at least one turtle. They coined catch phrases that became normal conversation and a huge part of pop culture. A large and I do mean large toy line, video games, board games, clothing, bedding, and anything else they can throw labels on they did. It all started from a comic in 1984 which the creators thought yep this is going to tank! Nine issues, and a cartoon show, and almost 30 years later the turtles are still in pop culture, but this time in the eyes of fan boys it's not going well.

After three live action films almost 20 years ago Hollywood has decided it is time the lean mean green fighting machine returns. To live action form on the big screen. This time Michael bay is producing the film after his company platinum dunes bought the rights. This is about the time the fan boys go crazy, because I guess Michael bay messed up transformers? I don't see it that way, I see a film maker that took a 30 minute cartoon from the 80s and turned it into a fun summer blockbuster, three of them. Do they have great plots? Nope, great acting, no not really, but lets not forget its a movie based on a cartoon that sole basses was to sell toys, so they were just 30 minute toy commercials. He made transformers not citizen prime or Optimus's list. Giant transforming robots come to earth and fight the end, they fact we got any plot was a bonus! 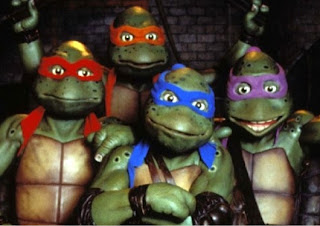 Now he is producing ninja turtles, and I say ninja turtles because they dropped the teenage mutant part. They are no longer mutants but spawned by a alien slim left over by a alien race from dimension X, wait so dimension X is in this film? Finally Krang in a live action turtles film? About time, see fan boys saw the whole not mutant part and missed the Krang thing and dimension X. I'm 30 I have seen that ninja turtle storyline over and over again they've done that, so why tell it again with a bigger budget? I look at turtles like batman, Tim Burton did a darker batman after seeing the bright campy Adam west one, Burton re-did batman for a new generation then batman returns was a little more dark and a little more campy, Tim Burton re-did batman and story a little changes to his character he killed people it was our first look at "The Dark Knight" then Schulmocker gave us two bad films, bright, campy, again redoing batmans character. Then batman went away for away till Nolan gave us a real batman with his three.

See this is what is going on with turtles, had the campy cartoon then the darker live action film, then a less dark campy live action film then turtles three which is one of the worst films of the 90s. Then the turtles kinda just went away until now we are getting a new real version of them, how can anyone just assume they are going to be bad? It is already better than turtles three or the live action show in 1997 called the next mutation.

Ninja turtles is part and will always be part of our youth but as adults we have to base the new take on them as adults and not what we remember from our childhood! You can't jump the gun, have to wait and see I for one can't wait! And yes I'm a huge TEENAGE MUTANT NINJA TURTLES fan boy but also I've grown up and have the ability to still watch and read the original source material if I don't like the new movie can't no one "rape" my childhood. Except George Lucas!