This is an old review I did a few years back on Cinemaroll.com. I happened to come accross it, and decided to post it here. Some of it might be dated but I like some of the points I make about the flicks. I did some editing to keep it from being completely out dated. Now onto the review.

I picked up the 5 disc unrated collector’s set of the Saw Series. In doing this I decided to do a little Saw Marathon. I have to admit some of my complaints about it would have to stand corrected, but I’ll talk about that in a min. I’ve decided to do a review of these five. I'm approaching this as a little review of each film.

Well the first thing I do want to say about the Saw series is that before I picked up the five movie pack, I had only seen the first two movies (when they were in theaters). Since it has been so long, I should have expected that I could have remembered things wrong, and end up being wrong on a couple complaints I had about it. Okay, well I suppose I should tell you what these complaints were. My biggest complaint I had was that in Saw 2 they completely ignored the whole concept of why they called him Saw in the first place. Well I have to say that I stand corrected on this one. Watching it again, it’s actually one of the first things that they do, I must have not noticed it while in the theater, the first time or something. The other was that the second one just wasn’t original enough to even compare with “Saw”. On this I have to say I may have been a little to critical, but it does suffer from sequel syndrome. In most cases with the first sequel of any movie has this issue, it’s a rare occasion where the sequel is as good or even better than the original. I never really had any complaints about the first Saw film. At the time it was original and new, and I still stand by that.

Saw had an original concept, it kept you questioning things, and the pacing was great. It kept up my enjoyment of the film, and kept my attention. I would have to give the film a 7.5 out of 10.

Saw II suffered from the sequel issue that most sequels suffer from. It’s not original anymore. The story to it wasn’t as good. The only characters you might be able to find any sympathy for are Daniel Matthews (Erik Knudsen), and Jonas (Glenn Plummer). Though personally my favorite character was Eric Matthews (Donnie Wahlberg), even though he screwed up anyway. In the end I give this film a 5 out of 10. It was an average film, at least I didn’t walk out wanting my money back.

Saw III was undeniably better than it’s last predecessor. I really liked how it brought all of them together. That is one thing I like to see in a lot of films, is how some can interconnect. I also liked that they brought back Donnie Wahlberg. One thing I wasn’t happy with was how the first trap scene was done. That scene with the guy in chains. The editing of that wasn’t very good. They had too much repeating of the same exact sound fx, and I believe the continuity wasn’t very good either on it. Other than that I really enjoyed it, I give it a 7 out of 10.

Saw IV was a film that didn’t make sense to do, but it worked. There isn’t much to say about this one, other than that I did like how they put this one together. I also liked how they brought in another person who was helping Jigsaw, it wasn’t perfect in how they did it, but it worked. I give this film a 6.5 out of 10. 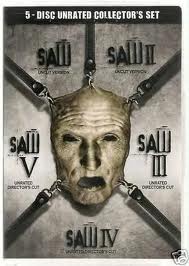 Saw V was the last Saw film I’ve seen thus far. This one felt like they were running out of ideas, but it still worked… barely. Don’t get me wrong I did enjoy it, but I saw the ending coming, at this point it’s starting to feel a little repetitive. All in all I give Saw V a 5.5 out of 10.

In total for the 5 Disc UnRated Collector’s Set I give it a 6.5. It gets a bonus half point for commentaries, and some cool special features. Thus kicking up to a 7 or of 10 in total. Yeah I like special features, and commentaries. That it for now catch you guys later.
Well after the first two Saw movies, I didn’t watch any until now. So now I have finally seen all the Saw movies that are on DVD at this time. I’m going to rate them from one to ten. One being a waste of time and money, five being an average movie, and ten being perfect. I will also give a 1 to 10 review on the collector’s set in total.
Posted by Apollodorus Films at 1:36 PM