I finally had a chance to see Wreck-It Ralph. This being a site where we talk movies, and games I thought this would be a perfect movie to review because it hits the best of both worlds.

Wreck-It Ralph is a video game villain from Fix It Felix Jr., who doesn't want to be the villain any more. He wants to be the hero of a game for once. He sets out to fulfill his dream but his quest brings havoc to the arcade he calls home instead. 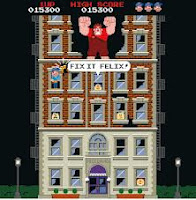 It's been long enough since the movie came out where I shouldn't worry too much about spoilers, but I'll try to not give too much away anyway for those who have not had a chance to see it yet. To start off Wreck-It Ralph if a fun movie for all to see, and it has something in there for everyone. While watch the flick you notice different references, and cameos of some of our favorite classic arcade, and console characters. There are reference and cameos to Pac-Man, Sonic, and so many others. You actually need to watch the movie a couple times just to catch all of it, and even then you feel like you missed something because of how easy it is to get wrapped up in the movie.

Wreck-It Ralph is one of the few movies that gives video game movies a good name. I have to give it a 5 out of 5. It's a fun movie, with a great story, where you care about the characters, and you can't help get excited every time you see a new cameo, or reference to one of the classics. If you like video games, you'll probably like this movie.
Posted by Apollodorus Films at 12:51 PM